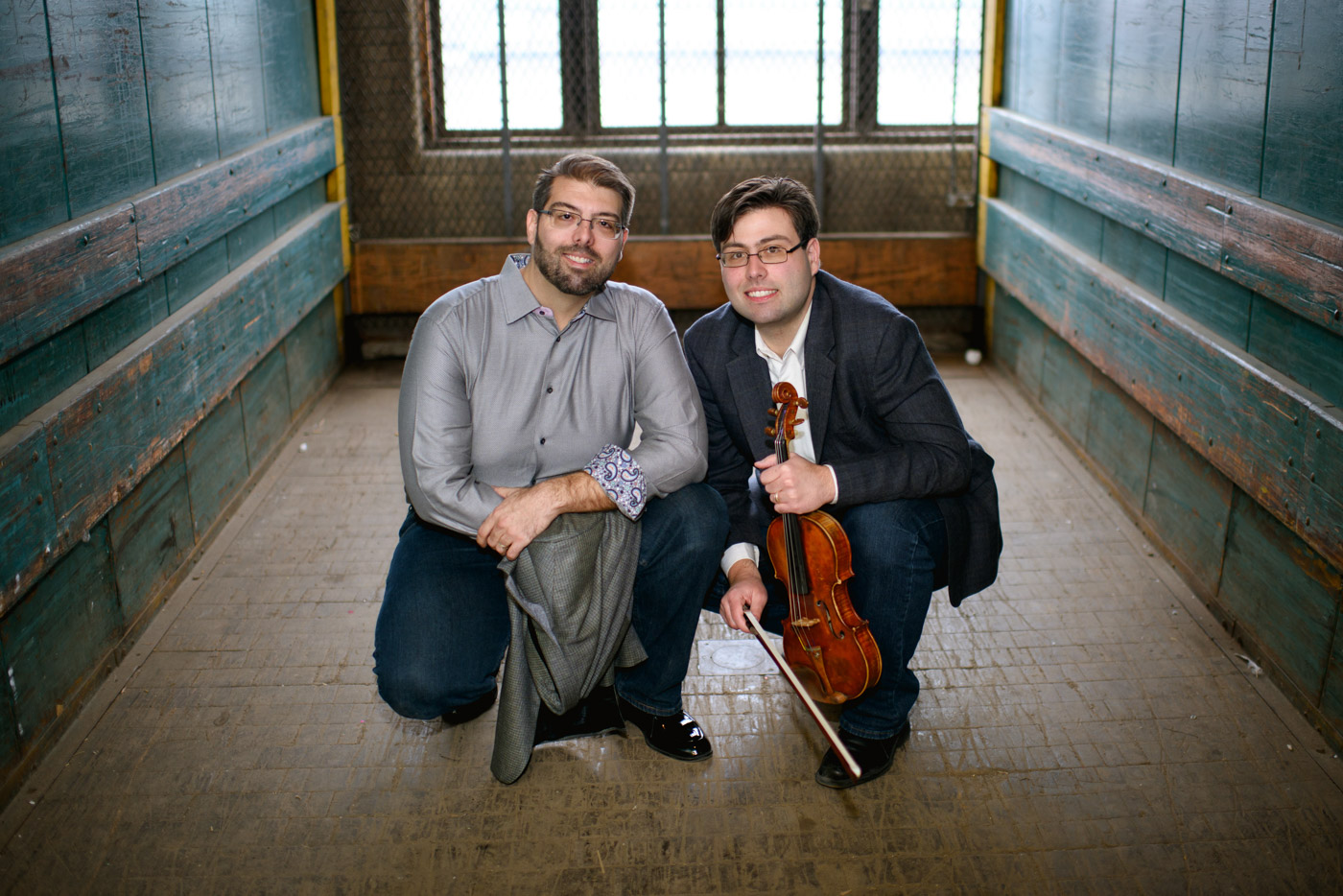 The Irrera Brothers, John and Joseph, will perform as part of a concert being presented by the Batavia Peace Garden on Nov. 13 at Batavia High School. Joseph Irrera, right, will play a rare Steinway piano for the concert, which also features soprano Colleen Marcello.

BATAVIA — A holiday concert scheduled Nov. 13 at Batavia High School is a premier event sponsored by the International Peace Garden Foundation in conjunction with the Friends of the Batavia Peace Garden.

Not only is this concert the first one in the world ever sponsored by a Peace Garden to benefit the International Peace Garden Foundation, but it will also feature three renowned artists with roots in Genesee County, one playing a Steinway piano; a first for Batavia.

“Peace on Earth” will star the Irrera Brothers, pianist Joe and violinist John, both 2000 graduates of Batavia High School and sons of Dr. Joseph and Judy Irrera of Batavia; and Colleen Marcello, an acclaimed soprano whose grandfather Philip Marcello was a mayor of Batavia.

The critically acclaimed Irrera Brothers began their musical education at the ae of 5. They have captivated audiences throughout the United States and abroad. The New York Concert Review cited their 2013 concert in Carnegie Hall as a “riveting and dynamic performance.” Additional concert engagements have brought the brothers to notable venues such as the Lincoln Center, Kennedy Center, the Eastman Theater, and internationally throughout France, Germany, Italy, Bulgaria and Latin America.

Joe is one of only 500 Steinway Artists in the world. He heard his first Steinway when he was in fifth, when his parents took him to a performance of the Rochester Philharmonic Orchestra, starring pianist Emanuel Ax.

“I knew then piano was something more for me than a hobby, and I wanted to be up there,” Joe said.

Joe sent in his application materials to Steinway & Sons in November 2012. They wanted documentation of every single recital he ever gave, every news/press story ever written about him, and evidence he had commercially released recordings.

He learned in February 2013 Steinway gets thousands of applications every year and had not yet got to his. It was two months later he was formally notified he was officially being welcomed into the prestigious family of Steinway Artists.

“The feeling I experienced with accomplishing this life-long goal cannot be put into words,” Joe said. “It is one of the most memorable moments of my entire life.”

Another notable feature of this concert will be the Steinway Model D grand piano from Denton, Cottier & Daniels in Buffalo, which Joe will play.

“The quality of the music at this event will be unparalleled and will be a wonderful way to launch the holiday season,” said Paula Savage, founder of the Peace Garden and the International Peace Garden Foundation. “Joe recently moved to San Francisco and is flying back just for this concert. That’s how much of a commitment he has.”

The Steinway Company was founded in 1853 by German immigrant Henry Engelhard Steinway in a Manhattan loft. He and his sons built their pianos one at a time, applying skills that had been handed down from master to apprentice, generation after generation.

“They are hands down the best pianos in the world, 100 percent built by human hands,” Joe said in a phone call from New York City earlier this week. “From the day they cut down a tree for the wood to the day the pianist sits down at the keys is a three-year process.”

“It can take a concert pianist’s works and replicate them exactly,” he said. “It will play Chopin as if I’m sitting there.”

Joe said he would also be taking a tour of the Steinway factory in Manhattan while he was there.

Each Steinway piano consists of more than 12,000 individual parts, has its own musical character, and is as unique as the individual who plays it.

Denton, Cottier and Daniels will bring the Steinway, valued at $165,000, to Batavia High School early, so students will have an opportunity to view it.

Denton, Cottier & Daniels is the world’s oldest Steinway dealer, founded in 1827 by James D. Sheppard, who brought Western New York’s first piano to Buffalo on a mule-drawn boat up the Erie Canal.

Jim Trimper Sr. has owned the company since 1983 and runs it with his children, Jim Jr. and Michelle Trimper, vice presidents.

Michelle said they were happy to support the fundraising concert, because they had heard about the Peace Garden and thought it was a fantastic idea.

“We need more peace in the world now,” she said. “And we are friends of the Irreras. They are some of the finest musicians we know.”

John Irrera echoed his brother’s excitement to be performing in their hometown, and to be doing a benefit for the International Peace Garden Foundation.

John, who lives in Virginia and is on the faculty of Virginia Tech, said he fell in love with the violin in first grade at John Kennedy Elementary School.

“I signed up for violin lessons, and the rest is history,” he said.

His violin is an exact, modern copy of an 1871 Guanari del Gesu, he said.

“I’m anxious to visit Batavia High School and see what they’ve done to the school with all the renovations,” John said.

The men both said it’s always fantastic to come back and play in the place where they grew up.

“The last time we performed at Batavia High School, we were students there,” Joe said.

Savage learned about Marcello after traveling to a little town in Italy trying to reconnect with some cousins. She also discovered Marcello was a cousin of hers.

When Savage heard Marcello sing at a concert in Buffalo, she told the singer she had to come and sing with the Irrera Brothers.

Marcello, who lives in Springville with her husband Jeffrey Brecker and their 5-year-old daughter Madeline, said she had no idea who Savage was talking about, as she had never heard of the Irrera Brothers.

“I will be meeting them for the first time,” she said.

Marcello’s first professional performance was at age 12 in “Annie” at Artpark. She received her master of vocal pedagogy and performance from Westminster Choir College. A frequent soloist in the area, she won the audience over as Sister Blanche of the Agony of Christ in Opera Sacra’s recent production of the Dialogues of the Carmelites in Buffalo. She has also been a featured soloist under the baton of Robert Franz and Marvin Hamlisch with the Buffalo Philharmonic Orchestra. Her musical talents have also led her to off-Broadway musical theater in such productions as “State Fair,” “The King and I” and “Fiddler on the Roof.”

She is excited to be performing in Batavia and to take the stage with the Irrera Brothers. All her family is coming, she said.

“Its much more rewarding for me to sing for family and friends,” she said. “You can sing on the road, and when the curtain comes down, who cares.”

The concert will take place from 4 to 6 p.m. at the Batavia High School Auditorium and will feature a variety of operatic favorites, some Josh Grobin selections, a Puccini and Christmas music. Tickets are $15 for general admission, $10 for students and $30 for VIP tickets, which also include a meet-the-artist cocktail reception at the Dibble Center after the event.

VIP tickets are very limited and available on a first-come basis. All tickets are available at Roxy’s Music Store, The Genesee-Orleans Regional Arts Council and Genesee County Chamber of Commerce, or by calling (585) 201-7100 or (585) 343-2387.

There are no upcoming events.